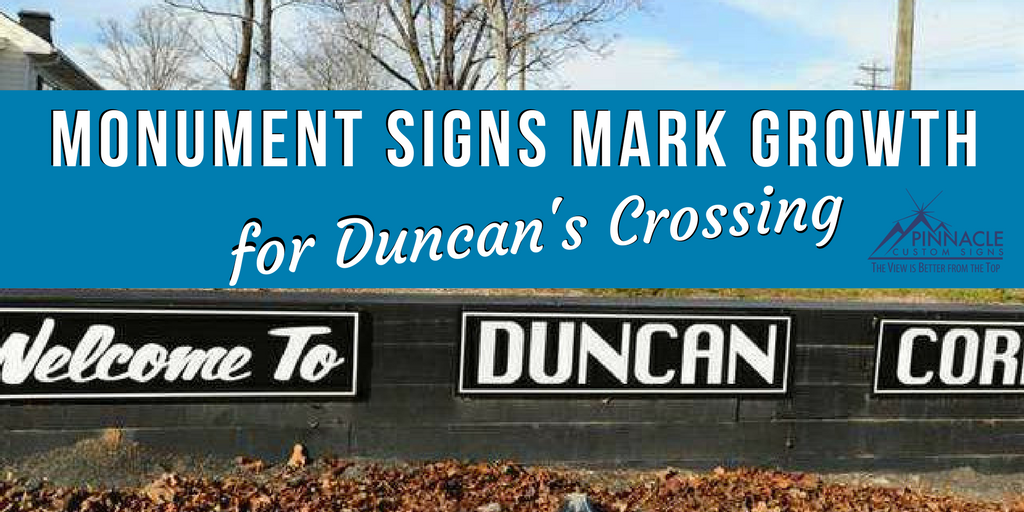 If you were to drive through the area known as Duncan’s Corner today — it might be hard to recognize that just 30 years ago this area was nothing but farmland and a four-way crossing.

As a matter of fact, the only reason that this small area became known back in the 70’s is because of its lack of signage.  Frank Duncan recalls many family dinners being interrupted by traveler’s trying to figure out which way to turn right near his childhood home.

Back then it was referred to as Duncan City.  Frank Duncan’s father Lucius understood the need for wayfinding signage at that location well before the massive traffic flow you find at the corner of Spout Springs and Thompson Mill today. So, in the late 1970s, Lucius Duncan asked the county to put up a road sign so people would stop interrupting family dinners. He was told no.

Therefore, Lucius just erected a handcrafted sign himself that directed people to cities like Winder, Athens, Jefferson, Commerce and even London and Hong Kong.

In an interview with the Gainesville Times in 2012, Frank stated that “Daddy would tell me to go answer the door cause he was eating supper, so I’d go answer it and have to tell people which way they needed to go. A lot of times, it’d be dark outside and I’d point them down the right road.”

Lucius Duncan farmed cotton and corn on the land that is now prime real estate for shopping centers, restaurants, and doctors’ offices. Now, Frank’s family handles the flurry of commercial development on what is known as Duncan Corner, which sits right at the intersection of Buford, Flowery Branch, and Braselton, GA.

As Frank foreshadowed, this area is anything but farmland almost fifty years later.  Grocery stores, restaurants, and retails shops line the once sign-less streets.  Pinnacle has worked with several patrons in this area including Workout Anytime in Flowery Branch.  However, we are honored to have the opportunity to work with the next generation of the family namesake– Billy.

Billy has recently developed a small retail space nestled between Thompson Mill Rd and Sparta Way.  The outparcel already has a tenant in a new workout facility and the new location for Papa Jack’s restaurant.  However, the one thing that was missing is similar to the one thing that was missing all those years ago.  A marquee sign to provide guidance.  However, in this instance, it was a monument sign that Frank needed.

The Duncan’s installed two illuminated cabinets with custom fabricated aluminum toppers with the shopping complex name routed out so it shines through to highlight the development name — Duncan’s Crossing — with four large and four small locations for tenant panels to display the merchants for this facility.  The identical merchant monument signage featured aluminum cutouts at the top to reflect the Duncan’s Crossing name.

Just like the Duncan family, monument signs give branding a legacy.  Often a monument sign is coordinated with similar masonry as the development itself to provide continuity and class. However, you can pick a completely different material element that compliments rather than coordinates with the building.

Monuments can be constructed out of multiple materials aside from masonry such as the aluminum used on the signage at Duncan’s Crossing.  Other options include using HDU foam and other imitation products that provide a masonry look.  These products provide good faux finishes for a professional final product.

Monuments can light the way after dark with illuminated cabinets or can simply be traditional non-illuminated signage.  Lights for monument signs can be incorporated into the actual sign body utilizing anything from programmable messaging to simple lights place on the ground facing toward the sign.

We would love to work with you on your monumental project.  Reach out to us today to schedule a free estimate or consultation.  Our business is designed around helping your business succeed through making sure that no one has to figure out which way to go!  They can see exactly where you are and know how to get there!