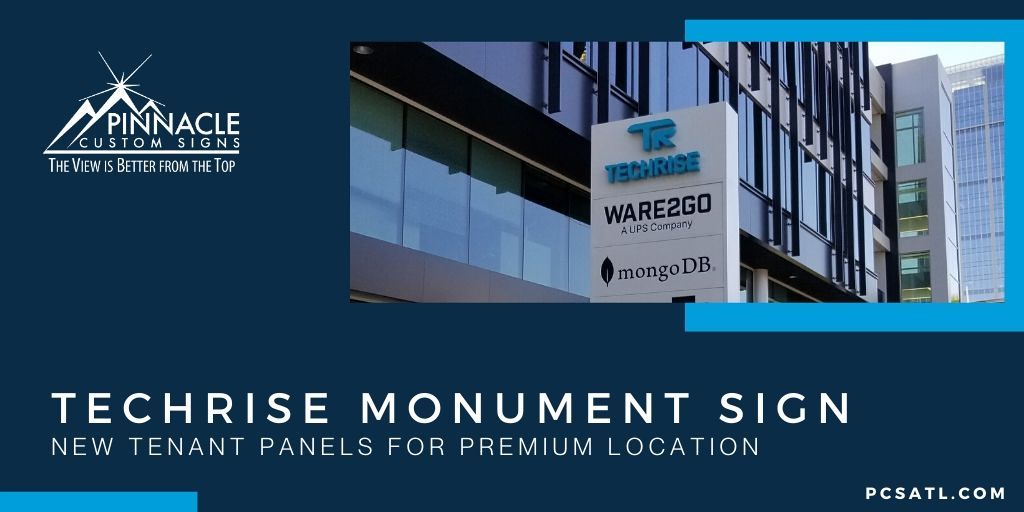 In September of 2019, we received a request from a customer in Midtown needing a new sign. We met with Patrick Scully of Techrise to discuss his needs.

They walked out of the large five-story building located at 3405 Piedmont Ave – at the corner of Piedmont and Lenox – to discuss placing a new monument sign out front.

This sign would let them bring brand exposure to the company at this extremely busy intersection as well as provide brand exposure for the names of their tenants. Techrise owns the entire building and acts as the leasing agent for the additional tenants.

Adding signage seemed like a smart investment because the highly trafficked area would allow for visibility and advertisement at the same time. The structure for the sign would have different elements for the occupants.

After the information could be gathered and photos were taken, Pinnacle headed back to the office to discuss the needs with the design team.

Elements such as location and the need for monument signage were discussed. Collectively it was decided an all-aluminum structure with different elements would be the best method for completing what the customer needed.

The new sign would have clean lines and a fresh new look with paint to match the white elements on the building.  The idea was that it would blend in like it had been there since the building was built.

After going through six revisions and numerous communications between the design team and the customer, the design was finalized.

The new completed sign would be 15 feet tall, all aluminum, and internally illuminated.

The “Techrise” logo at the top would be reverse-lit channel letters mounted to the outside of the cabinet. The back lighting would shine off the structure and give a clean halo lighting effect to make the building name prominent.

Below these channel letter there are six marquee panels with space for 12 tenants. These panels would be routed aluminum faces, backed with acrylic and over-layed with translucent vinyl, which would illuminate just the logos at night. The final design has the current six tenants with space for the additional four tenant spaces.

With the design finalized, Natalie worked on permitting the structure set to sit in Midtown. Once we applied for the permit, it took about six weeks for the City of Atlanta to let us know we would need to apply for an SAP in order to have the permit issued.

After gathering all of the information and getting all the appropriate signatures we were able to obtain the permit at the end of January 2020.

We spent the next four and a half weeks in fabrication for all the elements to create and assemble the cabinet. Towards the end of production, we sent our crew out to dig the footer, pour the pad the sign would sit on, and set the pole that would support the sign.

Once this was finished, we took the sign from fabrication, slide it over our new pole, and placed it on the foundation to complete the job. The sign is sitting prominently in Midtown and will bring attention to Techrise and all of its tenants for years to come.